Marijuana and Gout: Does it Help with the Joint Pain?

Gout is a common condition affecting over 9 million Americans. If often arises suddenly with severe pain, redness, and swelling. 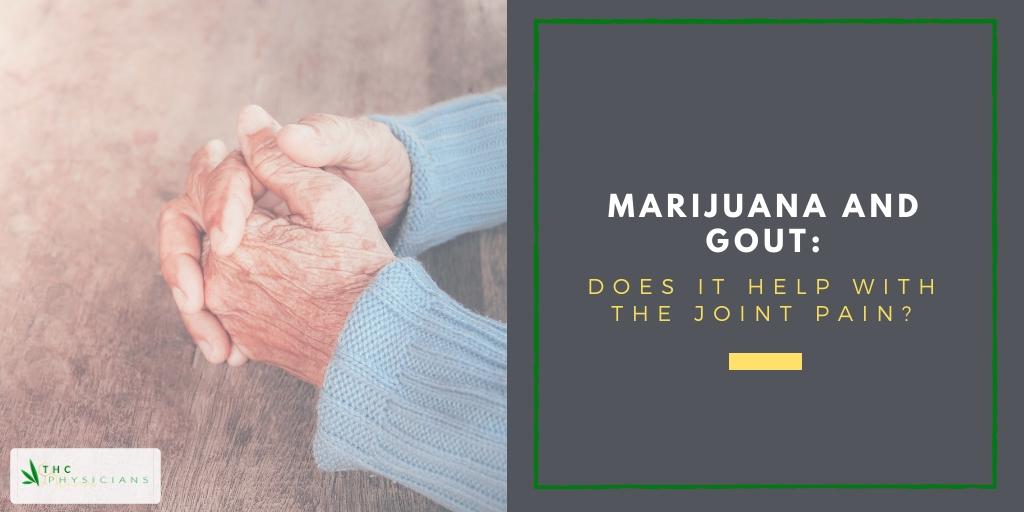 The history of medicinal marijuana can be traced back through millennia. The earliest recorded use of medical marijuana for gout dates back to the 2nd century B.C, when it was prescribed by Emperor Shen Neng to relieve the intense pain, redness and swelling of gout. [1] Despite these early records, the therapeutic potential of marijuana for the treatment of joint pain has been largely ignored by modern medicine until recently.

Gout is a common form of inflammatory arthritis caused by the accumulation of uric acid in the joints. When uric acid levels rise within the bloodstream, small crystals form in and around the joints, causing intense pain, swelling, and stiffness.

Uric acid is a by-product of purine metabolism. Purines are a group of chemicals present in all body tissues and many foods. Normally, excess uric acid is processed by the kidneys and excreted by the body in urine. Although, in people with gout, the system for keeping levels in check falls out of balance.

In most cases, it's because the kidneys cannot flush uric acid out fast enough, however, sometimes it's a matter of too much uric acid being produced or a combination of both. As a result, uric acid builds up, and crystals form within the joints. This also occurs throughout the body, including the outer ear, kidney, and skin.

Gout attacks often arise suddenly and without warning. Joints become very red, swollen, and extremely painful–particularly when pressure is applied. Symptoms usually peak within 8 to 12 hours and subside within two weeks. A subsequent attack may never occur. However, most people will experience a second attack within a year.

The time between flare-ups is called interval gout. Although there's no pain, low levels of inflammation may still damage joints. If the condition is not appropriately managed, attacks can become more frequent and severe. Some people will develop chronic gout, whereby several attacks repeatedly occur within a short period of time.

Gout typically affects the big toe, but it can occur in any joint of the body. Other common sites include wrists, ankles, knees, and elbows.

Gout was once called the "disease of kings," as the condition afflicted only affluent men with the means to indulge in rich foods and excessive alcohol. Today, gout remains a condition that most commonly affects middle-aged and older men, although post-menopausal women are vulnerable too. According to the most recent National Health and Nutrition Examination Survey (NHANES), over 9 million Americans suffer from gout, including 6 million men and 3 million women.

Susceptibility to gout is often inherited, meaning the condition runs in families, although not all family members will develop gout. Certain health conditions and lifestyle factors appear to play a more significant role, including:

When a gout attack occurs for the first time, you should make an appointment with your doctor. Your doctor can recommend steps to reduce the pain and inflammation:

Your doctor may prescribe the following medications within the first 24 hours of on an acute gout attack:

There are several ways to reduce your uric acid levels, including:

These medications can have unpleasant side effects. The most common include:

Diet: Diet plays a critical role in regulating the body's uric acid levels. Eating high amounts of meat, seafood, and sugary soft drinks increase serum uric acid levels and the risk of a gout attack, whereas consuming plenty of fruits and vegetables, particularly those high in vitamin C, have a protective factor.

Alcohol: Alcohol consumption can interfere with the elimination of uric acid from the body and appears to trigger recurrent flares. One study, conducted by epidemiologists at Harvard, found that drinking two or more alcoholic beverages a day (particularly beer) doubles your risk of developing gout, which makes sense since beer contains a lot of purines. If you have gout, it's recommended that you drink plenty of water, at least 2 to 4 liters per day, and reduce or eliminate your alcohol intake. [4]

To help manage your weight, consider integrating at least 30 minutes of physical activity into your daily routine. To avoid aggravating painful joints, choose low impact exercises such as cycling, water aerobics, or rowing. You will also benefit from low-impact weight training, which will increase your resting metabolic rate, helping you burn more calories throughout the day.

Scientists are exploring the potential of marijuana as an alternative treatment for a range of inflammatory conditions, including gout. If you see a qualified THC Physician, they may recommend CBD to reduce the pain and inflammation associated with gout.

Cannabidiol (CBD) is a non-psychoactive cannabinoid shown to attenuate joint inflammation and pain with minimal side effects.

A 2015 study published in the European Journal of Pain examined the efficacy of transdermal CBD for the treatment of joint pain and inflammation in rats with arthritic knee pain. Skin patches with varying doses of CBD were applied over four days. Scientists measured changes in the joint's circumference and took tissue samples to determine the effect of CBD on inflammation. An incremental heat stimulation test was also conducted to assess joint pain. Scientists found that transdermal CBD (0.6 and 6.2 mg/day) reduced the levels of joint pain, swelling, and inflammatory immune cells. Although these findings are not directly linked to humans, the results are promising for gout patients. [5]

Scientists have also examined the mechanisms behind CBD’s therapeutic effects on gout pain. For example, animal tests have demonstrated a dose-dependent reduction in pro-inflammatory cytokine release, specifically Tumour Necrosis Factor (TNF). [6] Data from in vitro tests (e.g. within a test tube) have also indicated that CBD causes gradual desensitization of sensory neurons through the activation of TRPA1. [7] TRPA1 is an ion channel responsible for modulating somatosensory responses, including inflammatory pain.