Marijuana use is increasingly common among people with depression or anxiety. But does marijuana interact with conventional antidepressants? 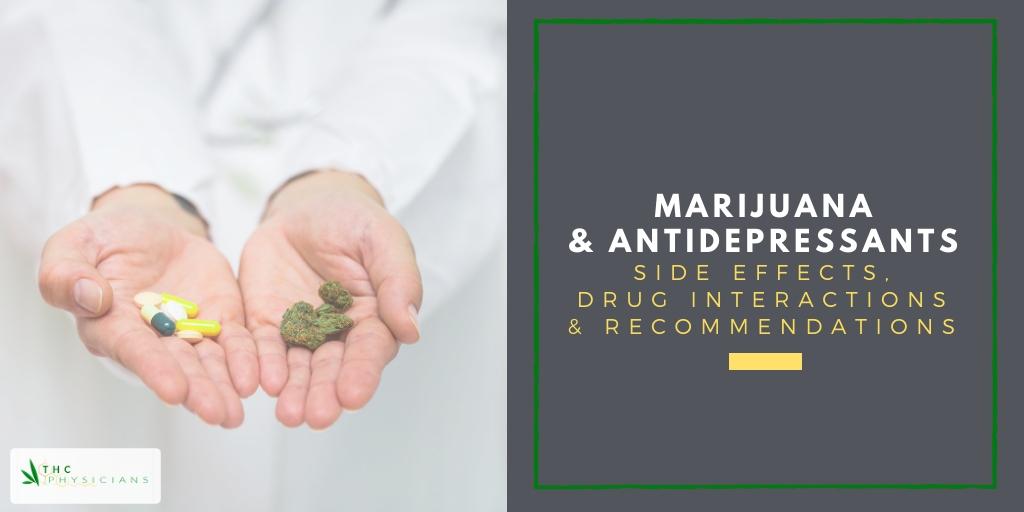 As one might anticipate, marijuana use is up to eight times more common among people suffering from depression or anxiety. After all, it stimulates the same pleasure centers within the brain that antidepressants target and, of course, triggers the release of the body's natural "happy" chemical dopamine. However, many of these people also take prescription antidepressants. Therefore, physicians and patients should be aware of the potential interactions between marijuana and antidepressants.

Surprisingly though, despite decades of research investigating the association between marijuana and mental health, there are very few robust studies that carefully examine how marijuana and antidepressants interact.

To our knowledge, just one published scientific literature review exists on the topic. The paper, released in 2011 by the University of Connecticut, examined the results of 79 studies to investigate the rate of adverse interactions between various psychoactive drugs and prescription psychotropic medications. The researchers presumed that taking marijuana and antidepressants together would be associated with harmful interactions, or at least, alter one another’s effectiveness in some way. But, to their surprise, an astonishingly low number of interactions were reported between the two.

There are several explanations for these results. Firstly, the lack of reports may indicate that adverse interactions don’t occur or are relatively rare. However, the results could also be a reflection on patient reporting behaviors. For example, patients may not recognize the signs and symptoms of a drug interaction or might be unwilling to disclose their cannabis use due to the stigma that still surrounds marijuana.

Based on the current body of evidence, it appears likely that new antidepressants, like SSRIs, carry a low to moderate risk for interactions, while older antidepressants, like TCAs, have a much higher risk. Nonetheless, mixing marijuana with any antidepressant can lead to a higher concentration of both drugs in the blood, which consequently, intensifies their effects, such as dizziness, drowsiness, confusion and paranoia.

Experts recommend that anyone using marijuana, whether for medical or recreational purposes, discuss their health concerns and all possible drug-to-drug interactions with their healthcare provider. Physicians also need to remain vigilant to potential interactions, especially with the rapidly shifting landscape surrounding medical marijuana.

SSRIs are the most commonly prescribed class of antidepressants and are considered relatively safe with a high therapeutic index (meaning a high blood concentration is required to cause toxicity). When taking SSRIs, patients report fewer side effects and less adverse interactions than other kinds of antidepressant medications.

Adverse interactions between SSRI and marijuana appear rare. However, there are anecdotal reports of users experiencing severe panic attacks when mixing Lexapro and marijuana. Similar cases of paranoia have been reported with other SSRI antidepressants.

Tricyclic antidepressants (TCAs) are among the earliest forms of antidepressants. Due to unwanted side effects, TCAs are usually only prescribed to patients who’ve been unresponsive to other treatments. Although TCAs are effective, newer medications with fewer adverse side effects have generally replaced them.

Like NDRIs, tricyclic antidepressants block the reabsorption of the chemicals serotonin and norepinephrine, increasing the levels of these two neurotransmitters on the brain.

Life-threatening cardiac consequences appear more common with TCAs than other antidepressants potentially because they are metabolized by the same mitochondrial enzymes that breakdown THC. THC is the main psychoactive constitute of cannabis. As a result, concentrations of THC may rise more rapidly in the blood.

NDRIs are a class of antidepressants typically prescribed for major depressive disorder, but also to help people quit smoking. The most common NDRI prescribed for depression is Wellbutrin. It's less likely to lead to weight gain or sexual dysfunction than SSRIs, although it can trigger seizures in those that are susceptible.

Although both drugs cause an acute increase in dopamine and norepinephrine, there have been very few reported adverse interactions between Wellbutrin and marijuana.

MAOIs were the first type of antidepressant developed. They were introduced during the 1950s to treat depression as well as other mood disorders, such as social phobia and panic disorder. These days, MAOIs are rarely prescribed due to undesirable side effects and a high potential for dangerous interactions with various foods and medications.

MAOIs work by inhibiting monoamine oxidase. This is an enzyme responsible for reabsorbing norepinephrine, serotonin and dopamine. As a result, these chemicals accumulate on the brain, ultimately improving mood. In rare cases, these antidepressants can cause Serotonin Syndrome, a potentially lethal level of serotonin.

A search on Google Scholar and PubMed for case reports concerning MAOIs and marijuana did not retrieve any results. However, due to the high-risk profile of MAOIs and their non-selective nature, the concomitant use of cannabis is not recommended.

However, there isn’t enough rigorous research out there to make any definitive conclusions regarding the safety of concomitant marijuana and antidepressants use. Marijuana may increase or decrease the effectiveness of antidepressant medications, which could prolong recovery and lead to problematic future use.

Patients should carefully consider the risks and consult with a qualified Medical Marijuana physician to find the right strain and dosage for their needs.