With the recent legalization of medical marijuana in several U.S. states, the number of people using cannabis for the management of debilitating medical conditions like chronic pain, insomnia, and anxiety has substantially increased. 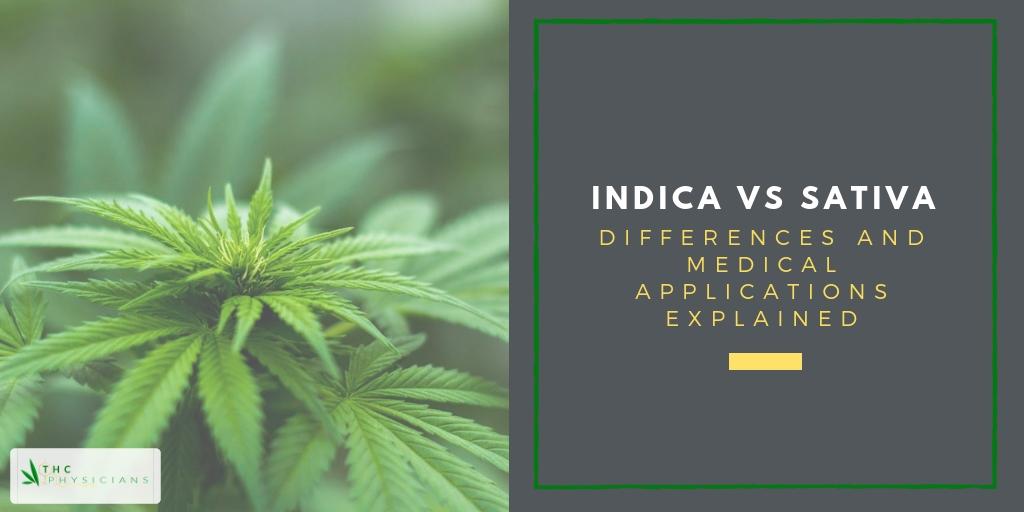 However, there’s still widespread confusion regarding the different types of cannabis and their medical applications. In this article, we use research from peer-reviewed medical journals to help you answer the following:

Our aim is to provide you with the knowledge and resources to make educated decisions about cannabis.

Indica vs Sativa: Deciphering the Difference

In mainstream literature, cannabis strains are often classified as either “indica” or “sativa.” Many consumers utilize these two distinctions as a benchmark for predicting both medical and recreational effects:

However, chemical analyses indicate that these guidelines are not entirely accurate. In fact, there is no hard evidence to support the notion that indica and sativa strains have distinctly different chemotypes, especially not to the extent that could make one intrinsically sedative and the other stimulating [1].

So why does a simple Google search of “indica vs sativa” garner over 28 million results?

Where did the Indica Vs Sativa Distinction Come From?

Botanists generally recognize three different types of cannabis: Cannabis sativa, Cannabis indica, and Cannabis ruderalis. Whether these are in fact three distinct species or subspecies of one polymorphic plant is still a subject of debate.

The term Cannabis sativa, meaning “cultivated Cannabis,” was coined by Carl Linnaeus in 1753 to describe hemp plants that were cultivated throughout Europe and Central Asia for their fiber and seeds. In 1783, another more intoxicating hemp plant was discovered in India by the eminent biologist, Jean-Baptiste Lamarck. Due to the plant’s distinctively different features, Lamarck distinguished it as an entirely separate species with the name Cannabis indica. Two centuries later in 1976, Cannabis Ruderalis was proposed as a third wild species from Asia and Russia by Small and Cronquist [2].

Since then, the formal botanical taxonomy of Cannabis sativa and Cannabis indica has been turned on its head by the viral spread of the vernacular term’s “sativa” and “indica”. Although prevalent in the colloquial language of cannabis consumers, these terms don’t correlate with the original descriptions established by Linnaeus and Lamarck in the 18th century.

The confusion can be traced back to Loran Anderson, a Professor of Biological Science at Harvard University who studied the leaf variations of cannabis within a controlled garden in 1980 [3]. He categorized the hemp plants into subspecies as follows:

And so, the sativa vs indica guidelines were born.

The simplified definitions and effect of these studies spread like wildfire within the non-scientific and unregulated Cannabis community. So much so, that now both terms are used—even if incorrectly—to categorize the thousands of strains cultivated today, in spite of the fact most varieties are hybrids stem from Cannabis indica.

You may have even noticed the physical differences between indica and sativa cannabis plants. It is believed each species (or subspecies depending on what you read!) developed its unique characteristics by natural and artificial selection.

But, does that have anything to do with the medical applications of different varieties of cannabis?

Is the Indica vs Sativa Distinction Relevant to Medical Applications?

Admittedly, the two-species model simplifies the organization of cannabis strains, especially for first-time users. But experts warn these over-simplified guidelines are nonsense and potentially dangerous within the world of medical marijuana.

According to Dr. Ethan Russo, a board-certified neurologist whose research in cannabis psychopharmacology is respected globally, “One cannot in any way currently guess the biochemical content of a given Cannabis plant based on its height, branching, or leaf morphology.” [7]

Dr. Russo explains that while there are many chemotypes of Cannabis— THC predominant, CBD predominant, and mixed types—the extensive inter-breeding and hybridization of cannabis has rendered the sativa/indica distinctions meaningless.

This means that not every indica strain will be uplifting, and not every sativa strain will be calming. You may notice effects that support this nostrum, especially when you already expect a certain effect. However, it’s important to understand there is no steadfast rule for predicting how a strain will react within your body.

So, with an overwhelming array of products to choose from, how else can consumers safely determine the medicinal applications of different strains?

How to Accurately Ascertain the Medical Applications of Different Cannabis Strains?

The effect of any given cannabis strain on an individual is the result of three interacting factors:

However, the largest factor contributing to the pharmacological applications of cannabis is the chemical profile. In recent years, the biochemical makeup of cannabis has been better recognized.

Today, we understand that the cannabis plant contains more than 400 hundred chemical compounds, including cannabinoids, flavonoids, and terpenes [8].

the largest factor contributing to the pharmacological applications of cannabis is the chemical profile.

Cannabinoids are the active compounds within cannabis. There are over 60 different cannabinoids, which occur in different ratios to produce varying effects. Cannabinoids exert their effects through the endocannabinoid system, a series of receptors (CB1 and CB2) located within your brain and periphery.

The two most commonly studied cannabinoids are:

Terpenes, or terpenoids, are also thought to play a major role in the effects of cannabis. These organic compounds give plants, fruits and flowers their smell, and there are over 100 difference terpenes in cannabis.

According to Dr. Russo, most strains on the market today are derived from THC dominant cannabis. He therefore believes the different effects are due to terpene content, which is rarely determined, let alone reported to potential consumers.

What is the Entourage Effect?

The ‘entourage effect’ is used to describe the interactions that occur between cannabinoids and terpenes. Multiple studies have shown that terpenes work with cannabinoids to alter the blood-brain barrier and harmonize the effects of THC and CBD [9].

Similar to aromatic oils, terpenes in cannabis can make us feel energized or relaxed. Take the following cannabis terpenes for example:

How to Choose Cannabis Strains for Therapeutic Effects?

When using cannabis to alleviate medical conditions it’s important to educate yourself on the different cannabinoids and terpenes found in each strain, rather than relying on oversimplified guidelines like the sativa/indica distinction.

Consider basing your selection based on the following three categories:

THC-predominant strains are used by consumers seeking a powerful euphoric effect. Patients also use these strains to alleviate chronic pain, nausea, and vomiting. Due to the psychoactive properties of THC, those that tend to feel anxious may experience better results with a strain that has more CBD.

CBD-predominant strains contain much lower concentrations of THC and are therefore preferred by patients seeking therapeutic effects without the intoxicating “high”. These strains are best for managing symptoms of depression, anxiety, insomnia, seizures, and movement disorders, like spasticity.

Balanced THC/CBD strains offer an even mixture of THC and CBD, offering a milder euphoric effect alongside therapeutic relief.

What Products are Approved for Medical Application in the United States?

Comprehensive public medical marijuana programs have been approved in a total of 33 states, while recreational marijuana is currently legal in 10 states, plus Washington D.C. The cascading movement of legalization has lead the U.S Food and Drug Administration (FDA) to review its status on the clinical applications of cannabis. This has lead to the following:

Epidiolex, an oral solution containing purified cannabidiol (CBD), was approved by the FDA In 2018 for the treatment of seizures associated with two rare, severe forms of epilepsy in patients two years or older [10].

The impact of Epidiolex was studied in three clinical trials involving 516 patients with either Lennox-Gastaut syndrome or Dravet syndrome. When taken with other medication, Epidiolex was observed to be effective in reducing the frequency of seizures in comparison to the placebo. However, some studies have shown that purified CBD is less effective than CBD-predominant cannabis due to the synergistic effects between cannabinoids and terpenes [11].

Synthetic cannabinoids, Dronabinol and Nabilone, have also been approved by the FDA to treat chemotherapy-induced nausea and vomiting in people with cancer. Dronabinol contains synthetic delta-9-tetrahydrocannabinol (THC), while Nabilone contains a synthetic compound with a similar chemical structure [10].

Dronabinol (synthetic CBD) has also been approved to treat the loss of appetite and weight loss in people with AIDS. While the FDA has not approved smoked cannabis, four trials demonstrate cannabis strains containing both THC and CBD significantly improves neuropathic pain associated with HIV-related nerve damage. [12]

As legalization around medicinal marijuana evolves, Dr. Russo and other experts within the field have called for accurate cannabinoid and terpenoid profiles to be displayed on all Cannabis products sold in both the medical and recreational markets. Understanding the exact composition, specific dosages and method of delivery are all essential to the successful integration of cannabis in modern medicine.