Medical marijuana laws were broadly expanded in the state of Florida with the passing of Amendment 2 on November 8th, 2016, making medical marijuana much more accessible to patients suffering from chronic medical conditions.

Florida’s Department of Health has published a list of debilitating medical conditions for which medical marijuana is considered an applicable treatment.

*Same Kind or Class means that qualified physicians have the right to exercise their medical judgement in recommending medical marijuana for patients that suffer from medical conditions considered to be debilitating and chronic.

You can only purchase marijuana legally if you are medically qualified, and the use of medical marijuana does not immunize violations of federal law or any non-medical use, possession or production of marijuana.

The below are Florida Marijuana Statutes related to non-medical marijuana: 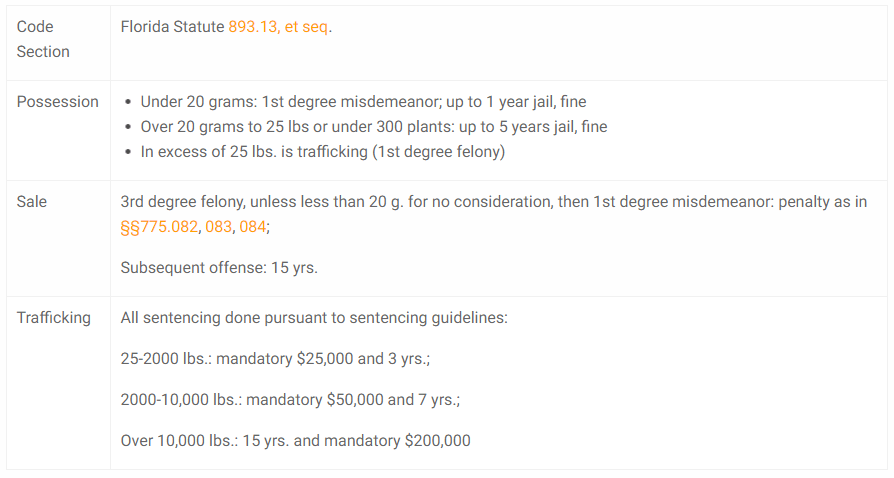 It is also important to note that regardless of what the Florida state law says, or what it may be updated to, marijuana sale and possession is illegal under the Controlled Substance Act. In other words, federal law will always trump state law.

While many doctors have undergone this certification, not all of them certify. Many became registered with the state but are not actively seeing medical marijuana patients. If you are seeking a medical marijuana doctor to get a recommendation, talk to THC Physicians.

The registration with the Medical Marijuana Use Registry follows the patient’s initial medical evaluation and recommendation.

Due to the acceptance of medical marijuana usage and regulation within over two dozen states and Washington D.C., some speculation has arisen regarding the de-scheduling of marijuana on a national level.

The scheduling of drugs, or Drug Schedules, as they are referred on the Drug Enforcement Administration (DEA) website, refer to the five distinct categories or schedules depending upon the drug’s acceptable medical use and the drug’s abuse or dependence potential.

Why marijuana could be considered for de-scheduling is based on its definition as having “no accepted medical use.” This is in stark contrast to what we are seeing permitted under laws of certain states with the regulation and recommendation of medical marijuana.

Thus, the speculation is that there may be some forthcoming legislation that is introduced that decriminalizes marijuana and removes it from the list of scheduled substances under the U.S. Controlled Substances Act of 1970.

This could potentially open up more public health investments to better understand the effects of medical marijuana on the brain and the efficacy of the drug for specific ailments or conditions. It would also place some regulatory restrictions on the advertising of marijuana in the same way the alcohol and tobacco companies are restricted.

This bar, however, only concerns medical marijuana usage which is why the emphasis on de-scheduling the drug is still just speculation.